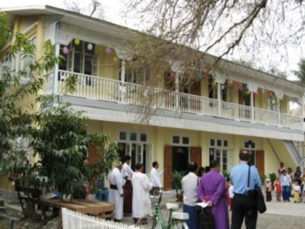 In 2007 the Young Men’s Christian Association Mandalay (YMCA) opened a new nursery building for up to 100 children in one of the poorest townships of Mandalay. It was joint project of the Australian Embassy in Myanmar and People In Need, both provided the funding. The building was donated to YMCA, which will operate the nursery.

Later that year we could arrange for the funding of furniture and educational material by the German Kindermissionswerk “Die Sternsinger”.